Cannes stands out on the global stage as one of the most glamourous towns. As a beach destination par excellence, it’s also a provençal foodie hotspot.

And let’s not forget its numerous wellbeing centres and sports facilities to keep you in shape. There’s no need to choose between the mountains and the sea here. Due to its fortunate location by the maritime Alps, the town lets you enjoy both aspects of nature in a single day. Discover Cannes, a jewel in the crown that is the Côte d’Azur, which makes you want to check in for good.

Since 1946, Cannes welcomes one of the world’s best known film festivals. The arrival of the stars of international cinema unleashes a frenzy throughout the town. It’s a relentless parade of limousines with dark-tinted windows, sequiens, outfits from great fashion designers and more.

The Cannes Film Festival is the ideal opportunity for ‘mere mortals’ to meet the biggest names of the silver screen. As a result, the tourist influx becomes a deluge every May. French people from all corners of the country and foreigners do not hesitate to cross from one hemisphere to another to get together in Cannes for the occasion.

The luckiest among them receive badges which give them access to a programme once reserved for celebrities. The others make the most of the decadent festivities held during the Festival. The streets, the beaches, the restaurants…all of Cannes springs into life and once the sun goes down each night, the town barely sleeps throughout a dozen days of festivities.

Cannes is synonymous with luxury, and this is reflected marvellously in its range of top-of-the-line shops. La Croisette is without a doubt the best location to find the most prestigious brands. Fashion houses and boutiques open their doors to a clientele which is as curious as it is demanding.

Not far from there, the Carré d’Or clusters the luxury jewellers together while the Rue d’Antibes brings more diverse and beautiful styles. That is where you can find the trendiest teahouses, the purveyors of refined decoration as well as the fashion boutiques adored by celebrities, and many others. People who enjoy pedestrian areas will head to Rue Meynadier, an unmissable visit for shopping-lovers. And as you approach the beaches of Midi, there is nowhere better than the Cannes La Bocca commercial area.

Cannes has everything you need, whether it’s for a few hours or a whole day of shopping. The golden rays of sun and the blue of the sea are then backdrop which serve to enhance the prestige of these ideally located boutiques. The choice is enormous! Brands listed in Cannes range from Chanel to Hermès, as well as Fred, Prada and, of course, Louis Vuitton. 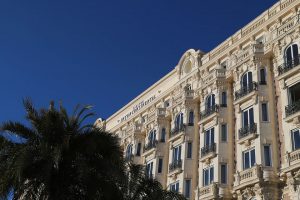 Cannes is a cosmopolitan town which is home to Michelin star restaurants, top-of-the-line shops, luxury real estate and palatial hotels like the Majestic Barrière and the Carlton. Those who come here, live here | ‘Qui y vient y vit’ That is the town’s motto. Indeed, there is no shortage of assets to draw in real estate investors. The market includes beautiful villas which often feature a dazzling garden.

The higher-up homes overlooking the sea or the well-to-do districts of Cannes are also numerous. Studios, apartments, anyone can easily find an asset which suits one’s tastes and budget. Although the housing stock is diversifying, it remains faithful to the town’s image. Prestige is also well within reach. It is reflected in the location of these exceptional assets, their layout, and the materials used in their construction. Every detail counts, all making you want to move to Cannes permanently, or just for your holidays.

The constant rise of the property market is inherent to the safety and calm which prevails in Cannes. The quality of life continues to improve.

Investors willingly turn a blind eye to the per metre squared prices which are often more expemsive than elsewhere in France. It is the price of reaching luxury and tranquility, a door which opens onto the property assets which fulfil even the most demanding requirements.

The garden homes in the Californie quarter are as sought-after as the apartments overlooking the sea by the Croix-des-Gardes. The sumptuous residences of La Bocca and the rooftop patios of la Croisette also stoke people’s desire to set up a home in Cannes. And let’s not forget the plots of land which are particularly suited to new builds, whether they are modest or unashamedly luxurious.

It is impossible to forget the natural heritage of this beach town awarded ‘four flowers’ prize for its public plantings. There are numerous properties to procure near the Butte de Saint-Cassien, Aurèl Square, the Jardin du Suquet, and the Villa Rothschild. The list is even longer, offering Cannes residents (and future Cannes residents) the chance to catch a breath of fresh air in green spaces, all while enjoying the refreshing sea breeze.

To return to architectural heritage for a moment, Cannes is bulging with exceptional buildings. Some are internationally well-known. One has only to think of the Villa Excelsior and the Château Saint-Anne. Religious edifices add to the town’s charm. The Chapelle Saint-Anne has now been converted into a cultural space. Musical instruments from different continents are exhibited alongside paintings from Cannes and Provence.

Its close relationship with the movie world inspired a great project: the creation of murals of the greatest names of the silver screen. Since 2002, we have seen depictions of Marilyn Monroe, Alfred Hitchcock, Jean-Paul Belmondo, Bourvil, John Wayne and other stars take shape. The magic of cinema has thus enchanted the streets of Cannes, and been linked to real estate assets with easy access to these attention-grabbing works of art. Are you interested in buying a villa in Cannes ? Head over to the John Taylor website.

This legendary promenade has not always been so prestigious A strip of land covered in reeds and dotted with marshlands once lay here. After major renovations, the boulevard was opened in 1866. It was then christened ‘The Empress’ Boulevard’. It was the start of a rapid metamorphosis which allowed from the creation of an area now known around the world.

La Croisette stretches three kilometres long. Shaded by the palm trees and bordered by majestic buildings, it is synonymous with luxury. It is here that the Palais des Festivals, a meeting place for celebrities arriving in town for the Cannes Film Festival, stands. La Croisette is also the place where you can admire the Martinez, an art-deco hotel built in 1929. The JW Marriott Cannes, knows as the Palais Stéphanie, is a five-star hotel built in the 1990s and rounds out the list of the ‘palaces’ on La Croisette.

Cannes is without a doubt a town where you’ll find the good life. Both tranquil and dazzling at the same time, it enjoys an advantageous location on the Côte d’Azur and offers secure day-to-day living for those who make it their home.